Andrew Golseth: Adam, I hear you’re an automotive designer—how’d you end up in the industry?

Adam Hubers: It must have been 2003. I took an auto body and paint repair program at a community college. I took that whole course, did body work, got my certificate, and during that time we worked on various concept builds, one of which went to SEMA. So, I’ve always been surrounded by that aftermarket and customization aspect of cars.

My passion for cars came about from growing up in the Middle East. When I was four years old, my parents were missionaries, so we went from Oman to Bahrain. I grew up with a lot of that JDM influence—it was everywhere over there. So, when I came back to the states I was already familiar with it.

Once I was able to get my license, I was always looking for quirky cars. My very first car was a 1984 Mazda RX-7 GSL-SE. That’s what I learned to drive stick on and from there the passion just kept growing. After that, I had an ‘84 300ZX. I’ve always looked for the unusual stuff and love old Japanese wheels.

After community college I went on to The College for Creative Studies because I wanted to get into designing cars. I got my bachelor’s degree in automotive design in 2010 and for the past six years I’ve been employed at the Fiat Chrysler Automobiles (FCA) headquarters with a year prior at American Expedition Vehicles (AEV). AG: What department are you currently working in?

AH: I’m currently in the design office, specifically in Jeep’s exterior design studio. Previously I worked in the Dodge and SRT studios. I was the lead designer on the ACR Viper. I designed the Hellcat logo and some other fun stuff. I’ve been pretty fortunate to work on some great projects.

AG: Tell me about the Honda Acty—how does a FCA designer end up behind the wheel of a funky Japanese Kei truck?

AH: Well, I’ve got a 1981 Datsun 210 wagon, I’ve had it for five years or so. I’ve modified it a bit. I’ve added a roof rack, lowered it, and slowly collected different wheels for it. One day, I found a set of wheels on eBay and the company offering them also had two Honda Actys listed.

The company is based in Ohio and they import all sorts of JDM stuff directly from Japan. Although they primarily import wheels, they occasionally bring in vehicles. I watched the Kei trucks on eBay and the four-wheel-drive model sold really quickly. Months later, I looked through their inventory and noticed they still had the two-wheel-drive version.

It was one of those impulse buys. Once I saw the trucks, I started doing research, trying to figure out what they were all about. I got hooked and I started weighing out, “Can I afford this? Do I need it?” Before I knew it, I was borrowing my boss’s trailer.

I live in Royal Oak, Michigan, so the trip to Columbus, Ohio, where this import company 4thUP is located, is a three and a half hour drive. So, you’re not going to drive all the way out there and say, “Thanks for the test drive,” and then go home.

So, I kind of knew I was going to buy it before heading out there. I didn’t want to drive it on the highway because these trucks only go 55, maybe 60 miles per hour—that’s why I borrowed the trailer. AH: Yeah, I actually did a trade with them because I really wanted to pick them up for the truck. I wanted to keep everything period correct. The factory wheels are 12-inch skinny steel wheels and these Enkeis are 14-inch. Right off the bat, I wanted it to look right, so I picked those up at the same time I got the truck.

AG: Have you done any other modifications?

AH: It’s got a fiberglass chin spoiler that was made for these trucks, but beyond that and the wheels it’s all stock.

AG: It looks like hilariously good fun. What do you do with this thing?

AH: I just cruise around town in it, since it’s not so great for highway speeds. It was a big hit at the Woodward Dream Cruise because the only cars there are muscle cars and other go-fast stuff, so this being so different was popular. I believe it’s the only Honda Acty in Michigan.

It’s just a fun old truck to drive around. I’ve gone to Home Depot, thrown bricks in the back, and picked up some furniture with it. I still use it—it’s not a show car by any means. It’s a daily when I want it to be. I was actually just forced to drive it in an ice storm against my will, only because my regular car was in the shop. That was pretty sketchy but I made the 30-mile commute to work just fine.

I actually had a police officer on a motorcycle pull up to me and ask me how I got it plated, which got me pretty nervous. Then he says, “I own one of these for my farm, but I can’t get it registered.” I thought that was pretty cool, he left me alone, but it’s legal under the 25 year grey market import exemption rule. AG: What’s it powered by? Give me the run down.

AH: It’s got a 550cc, I believe it’s a 0.6-liter. It’s a little three-cylinder with a four-speed manual. The engine is located directly above the rear axle. There’s an access hatch with four bolts and you can get to the motor from below and from the sides as well. Basically, Honda took a front-wheel-drive configuration and flipped it around.

It’s got a leaf spring rear suspension set up with a solid rear axle and independent front suspension. It’s got disc brakes up front and drums in the rear. The bed folds down on all three sides and you can actually remove the bed walls entirely so you’ve got a true flatbed.

AG: How’s it been reliability-wise?

AH: Everything has been really good. The toughest part about owning it has been getting used to driving right hand drive in the U.S, but mechanically the truck has been solid. The only thing I’ve had to do is general maintenance.

It’s tough to find parts for these because they never sold them new here, so you have to be patient waiting for parts directly from Japan. That said, I haven’t had any major issues and based on the research these are pretty solid. AG: Does this thing have any amenities?

AH: It’s got a Clarion AM radio and the original roadside flair required in Japan. I was told there was something about the interior, I guess this model was catered more towards the city, so it’s the “premium package.” Meaning the interior is black instead of the common brown and there’s a cover over the center floor portion, as “premium” as this truck gets.

There’s no AC and everything is manual controls—wind up windows, no power locks, etcetera. The seats are fixed in place and the headrests are right against the rear glass. Basically, everything in the truck is utilized the best it can be for max footprint.

It’s not the safest thing—your knees are essentially the bumper for the front of the truck. Everything is right there, easy to access.

AG: Do you have any future plans for this thing?

AH: At one point I was looking into lowering it. The only problem is, you’d probably want to lower the rear more than the front because as soon as you sit in the vehicle, it gets pretty low already, especially on the bigger wheels. Plus, the rear is axle-over-leaf, which makes it tricky to lower the back.

In the future, I hope to swap a GSXR 1000cc motorcycle engine in it and turn this thing into a screaming sort of nonsense vehicle, something to freak everyone out. But for now, I’m good with just cruising. 10
Featured My First Encounter With A Nissan Pao

I didn’t know that there was an Honda version of this type of cars. I am from Costa Rica and I knew this cars for the Dahiatsu Hi-Jet. Even a few years ago I used to see one kong pirple painted a few blocks from home. I didn’t have the money to buy one of those when I was 18 (least legal age for driving here) I believe I would be perfect for a student to get transported and why don’t to win a few dollars on a after class job. Thanks for this page, where else can you talk about a car like this? Kudos for you guys !!!

Where did you find the wheels (or did you buy them new)?
BTW, I’m the one who bought the all-wheel-drive Acty from that guy in Columbus

Strange, but really cool. Great to see so much different cars here.

I learned to drive in one of these in Ireland. My dad worked for the Honda distributors. I think I was about 11. They imported one just to test the market in 1985 and never brought in any others. They still have it to this day. Less than 20k miles on the clock and still running, though it could use some TLC. In the rain I used to practice getting a little oversteer!

On the Motorway its terrifying. 60MPH max, engine booming like crazy (it was the van version). If you rear ended somebody you would probably loose your legs.

It’s the only one in Detroit!

Besides, you know, this one in Detroit that you were within a quarter mile of based on that picture under the bridge: 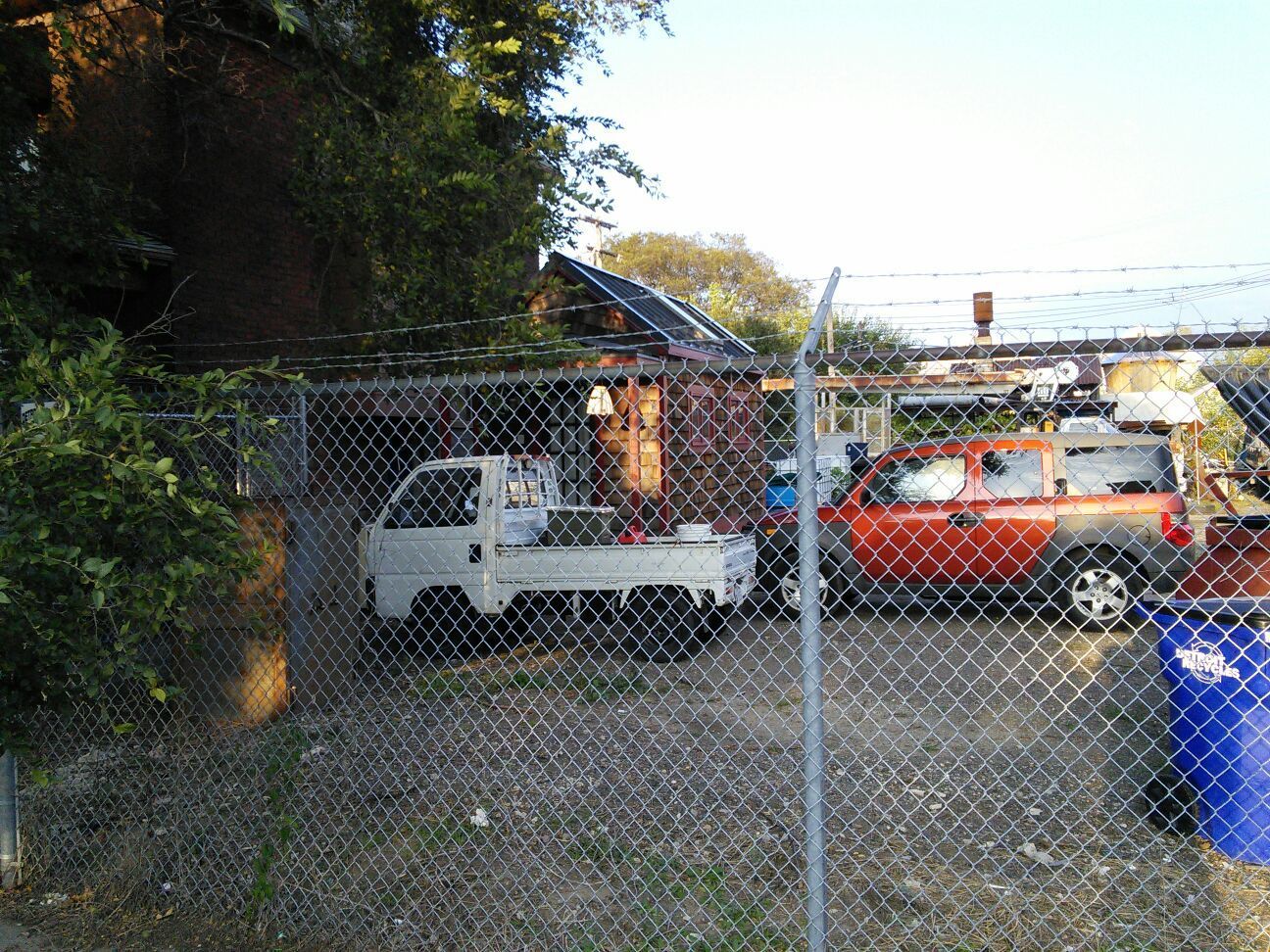 Oh cool! Is it street legal?

That is sweet! I love little cars like this. Keep ’em coming Petrolicious!

Fun is where you find it — not where everyone tells you its supposed to be.

How cool is this @vanillaadam