Why You Should Care About the Insane Vector W8

The Vector W8 was not one of those cars.

But I’m writing about it anyway because, well, just look at it. Is there any car on earth that looks cooler than this one? Some of you might say yes, but then I’d be required to inform you that I am an expert automotive journalist with roughly six months’ experience, and you are wrong. Before we get to the car itself, a little background on Vector. Created by a man named Jerry Wiegert, the company intended to face off against high-end supercar manufacturers like Ferrari and Lamborghini. Stop me if you’ve heard this one before: we’re all aware of similar efforts from flash-in-the-pan car companies like Zenvo, Gumpert, Venturi, and others.

But Wiegert seemed to be a bit more headstrong than others – and he was certainly better funded. That was proven with the W8, his first production car, which used a body made primarily out of carbon fiber, an “aircraft-like” gauge setup with reconfigurable displays, and a 3-speed automatic that could be shifted like a manual when desired. (The W8’s gear selector was mounted to the left of the driver.) Mind you, this is back when Ferrari gauges could only be trusted to provide a rough estimate.

Under the hood, the W8 produced an impressive 650 horsepower and 650 lb-ft of torque courtesy of a twin-turbocharged 6.0-liter V8 sourced from General Motors. While these numbers were measured with the car’s stock setup, the W8 allowed drivers to increase boost for more power. Electronically, of course. Vector said a W8 in stock guise could reach 60 mph in around four seconds, hit a twelve second quarter mile, and achieve a 220-mph top speed – all of this back when when Ferrari and Lamborghini were struggling to crack the 200-mph barrier. Unfortunately, running a supercar company is hard. The W8’s pricing – initially promised at around $250,000 – swelled to more than $400,000 by the time the car reached customers, making it one of the most expensive vehicles on the road. Sales were slow. And then there’s the Andre Agassi story: apparently the world-famous tennis player took delivery of a pre-production model under the condition that he wouldn’t drive it – but he did, of course, which led to an overheating car, bad publicity, and – for Agassi – a full refund.

Although Vector struggled to survive for a few years, the W8 went out of production after a reported 19 units were made – 17 customer cars and two pre-production test vehicles. And while the brand tried to make a comeback with the Lamborghini-powered M12 later in the 1990s, sales of that model were somehow even less stellar than the W8.

Interestingly, the epilogue to this story doesn’t go as you might think. While it’s easy to assume that the few cars produced by a failed, largely-unknown automotive startup would be worth nothing today, quite the opposite is true. A 1993 Vector W8 recently crossed the auction block in Palm Springs, California, where it failed to sell for $950,000 against a reserve price of more than $1 million. That’s a strong figure considering that some sales have been reported at much lower numbers – but it proves that I’m not the only person who thinks the W8 is one of the coolest cars around. Still disagree? You’re still wrong. 32
Featured Last Of Its Kind: The Only Surviving Sauber Group 5 BMW M1 31
Featured Why Buy A 911 When You Can Have Two 'Poor Man's Porsches' Instead? See the supercars that never made it out of Vector’s design studio | HwasungTruck.com – Trucks, Cars and Everything In Between

[…] day one Vector was plagued with problems: delivery problems, production problems, PR problems.� Andre Agassi took delivery of one and took the company to task when his car overheated; Vector took the car back and […]

See the supercars that never made it out of Vector’s design studio - Allrecipe.ga

[…] day one Vector was plagued with issues: supply issues, manufacturing issues, PR issues. Andre Agassi took delivery of one and took the firm to process when his automobile overheated; Vector took the automobile […]

How does a car company sell a car to someone and expect them not to drive it??

I worked for a company in Santa Ana back in the late 1980s that did a bit of subcontracting work for this car. Jerry always drove around everywhere in the car, wearing his black leather pants, so at least one of them didn’t overheat. He was a real character though, a snake oil salesman kinda guy. The car was beautiful but kept getting repainted in order to convince the public there was more than one of them at the time. If he could have lined up more investment money and put it into limited production in a shorter time period,… Read more »

I remember the two that would show up to Crystal Cove, and Jerry L (can’t spell that last name) loved showing his off. We struck up a convo about one I tried to buy in the mid-90s that was up at Milano Motorcars, but I was not too comfortable having recently been told the Agassi story. The car was going for really cheap then too. The story of Vector and the investors showing up with guns one night to claim the cars was legendary as well. Back in the 90’s there was a refinery explosion in Wilmington, CA and it… Read more »

I also was taken by the W2 and W8 in my younger days… Swore to myself that I would own one someday, but that dream is probably never going to come true. I did read an article not long ago about a test to see if the W8 lived up to the 220 mph hype, and it actually performed as stated. Handling was stated to be less than stellar but the top speed was actually close to promised.
All in all, I would still snap a W8 up in a heart beat if given the chance and given the money.

As a kid in junior high, I had high hopes for Vector. I had W2 and W8 posters on my wall (as well as the ubiquitous Countach, F40 and 959). The sad reality, though, is that the car was a catastrophe in the real world. Every time a magazine tried to test one, there were massive failures – typically related to the transmission or cooling system. As much as I admired JW as a 12-year old, any adult with business sense would never deal with such a “visionary.” Still, it’s a downright sexy car to look at – inside and… Read more »

I’m sorry, I don’t agree. Too ugly for me to waste my time on comments, come on Petrolicious, what’s next, the Reliant Robin?

Hey Doug, cool article about one of the weirder cars of my youth. I enjoy your book and your pieces on Jalop, and I like your sense of humor (I suspect you, like me, read too much Dave Barry growing up), but I like this turn to the semi-serious. I hope you do more of it in addition to the funny stuff.

Everyone throws numbers around like they have ANY shred of truth to them. People, those were all JW’s numbers. 650/650? 220mph? Really? Measured? Documented? Or is that what the sales brochures said? Tell you what… ask Agassi about it’s performance. Sure it looks cool. JW was an Art Center graduate, what do you expect? It was all marketing, all hype. I REALLY wanted it to succeed. Really I did. The first American Supercar. But each year I saw it at the LBGP, it was more hype, more waiting, more shuck and jive. And more evident that it would never really… Read more »

I sat in one of these as a kid. It was up for auction at the Auborn car auction. It was pretty wild at the time. I remember the screen inside displaying the car with an image of whichever doors were open and thinking that this was some insane car from the future.

You may be able to find records to see what it sold for then.

I remember Vector rather well. I even sat in one once. While all was pretty exciting, what got me was the 3-speed auto. I mean, it was in late 80s/early 90s, right?, and 3-speed auto, just the thought of it was so outdated we just couldn’t even comprehend it. It just felt tragic. But in the end, I didn’t really care about that, or the fact that it had whatever the engine or what, I just loved the car for its insane look, in a typically 80s fashion – for a long time I seriously hoped for a revamp of… Read more »

I actually spoke to him on the phone about the Graphic Design position. He was friendly enough and we spoke for about 10 minutes. He said he’d call back next week. Never hard from him again.

This car captured my dreams as teenager. Why? Because it was bold in every aspect. Spectacular performance and timeless design. More than anything, this car proved you can take existing tech at its best and break barriers. I also had the chance to meet him in person at an auto show in Chicago. This man, despite the bottom line results crafted a landmark in automotive history out of his sheer drive and vision. I would gladly own one.

Thank you for the background and epilogue on Vector. Here is a photo I took in Palm Springs of a Vector around the time of the auction, and apparently Jerry Weigert is the guy standing next to the car. I’m guessing this is the same car that was auctioned at Palm Springs? The auction results say it is a 1993, while this car was described as a 1992. 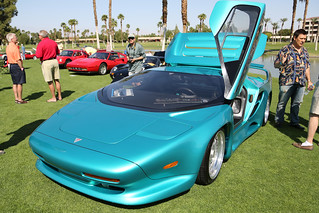 Wow- very cool piece on a car that captured my imagination as a kid. Definitely firmly in the ‘ahead of its time’ category.

I have read about the Vector company some years ago and to this day i think its still the wildest supercar America has ever tried to make. I still think of the company today as the closest thing to a American Lamborghini. So that would make the W8 the American version of the Countach. The car was simply outrageous for its time just look at the design and style of this beast plus its aerospace inspired materials and interior. A twin turbo engine from GM pushing roughly 650 horsepower was alot by the standards of the past and still alot… Read more »