When inspecting the tens of thousands of images we’d captured during the Goodwood Revival, there were times we had to do a double-take and reflect that, no, we hadn’t traveled decades back in time to work for Motor Sport during the sport’s heyday. Photographer Nat Twiss took a number of images that look very convincing when reduced to black and white at this year’s Revival—here are our favorite 12. Beware the time traveler. Really, it’s little more than a logo that separates this photo from looking completely convincing, which makes me wonder if #68 isn’t from another era entirely. Thanks to the mechanics, the Revival went off without much mechanical incident. Here, a steering wheel, intake trumpet cover, and team of mechanics are presented as artifacts from action during the weekend. This may be a replica of the beautiful and one-of-one Aston Martin DP214 prototype, but with modern materials, construction, paint—and the fact it’s not a prototype—even a replica’s form can be so unforgettably enticing. I can’t be the only person who thinks that the swirling reflection on its side is mesmerising… Recently, Sir Jackie Stewart spoke to us, and mentioned the “mind tricks” he’d developed before a race, thanks to his earlier career as an Olympic trap shooter. “When I drove racing cars, I had already passed through the uptight feeling. I was able to control that through my entire career, and I was lucky because I won most of my races in the first five laps, because I had already learned how to manage my emotions and not be affected by the big start, so to speak.” The Ferrari 250 GTO needs no introduction, does it? Literally on the pit wall at the Goodwood Revival is a pretty great place to frame a Ford GT40 and create a scene that looks like the mid-’60s. The Revival’s atmosphere is responsible for scenes like these. Rich in both detail and history, I imagine, for instance, what the mechanics might be talking about in relation to the car they’re tending to.

Do you think that black and white images are immersive when taken at the well-attended Goodwood Revival? If you haven’t been, it really is a terrific weekend.

Nice pictures. I wonder if back in the day you’d see mechanics of open wheel cars sitting on the tires as much as today…

i shoot cars pretty exclusively in black and white. So much more detail and mood available from every frame. Good stuff

I couldn’t make it this year sadly. I took this last time though: 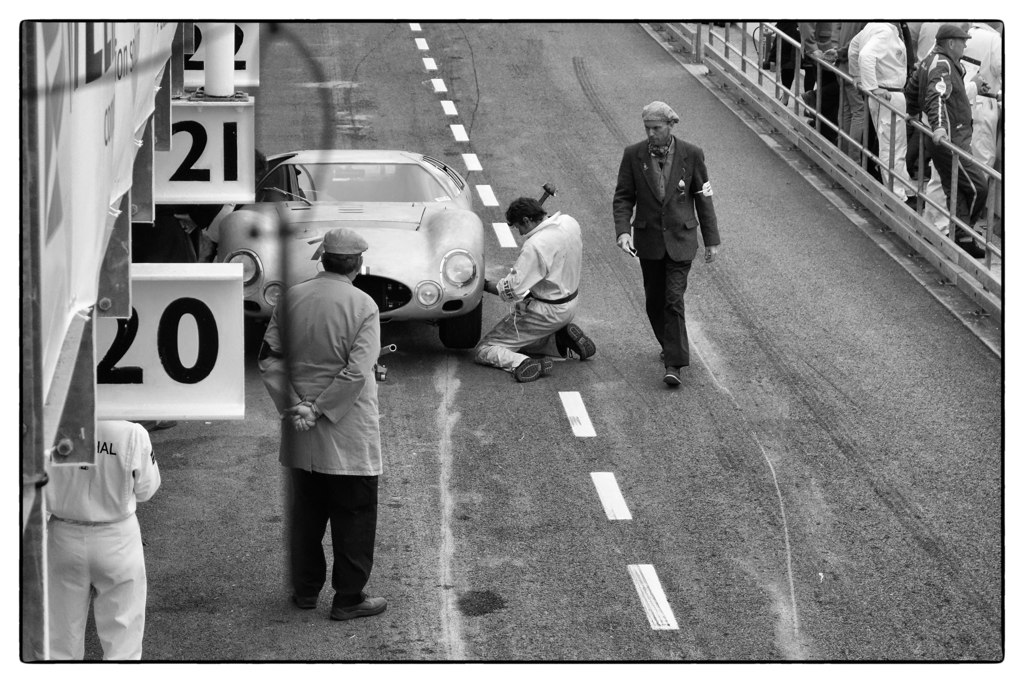 Is there really no way to edit a post?