Porsche calls them, “vertical louvres”, and they’ve been on our minds since the company showed the revised 911. For 2017, the car needs more air for its standard turbocharged engine—but it’s a break with tradition that makes me wonder: why now?

Just what is the power of a seemingly subtle change? Artist and photographer TJ Grewal expressed the opinion that the engineering-led design change jarred him, saying, “the grill with slats going side to side has only been part of the 911 design since its inception”.

After reading that, I took way too much time poking around forums and the company’s historical archives, looking for vertical slats. Older 911s have vertical elements to their rear grille, but the 2017’s decklid grille is to let air in—not out, like in years past. Porsche, never to disappoint, even made a short film on improvements to the engine and cooling.

Looks-wise, it stuck out the second I saw the new car. That said, I really like the update, and if it’s so functional, I’m sure we won’t have to wait too long for someone to produce a version for older cars.

Have you noticed this subtle change? Chances are, Porsche 911s will have vertical slats on its decklid grille for some time. And yes, you can already configure the new 911 to your tastes. I’ll take mine in Graphite Blue Metallic, please. Finally something different… I mean lets be frank. Since 1998 its looked the same, and not just the same as in its a 911, the same as in you have to be a rivet counter to be able to tell the differences between years.

I don’t mind the overall look of the 991 series. My issue is with its size, the current 911’s are too long in wheelbase and tail to nose. They need to shorten it. I also how this trend of larger wheel arches to support larger diameter wheels ceases. Otherwise in 10 years, all cars wheel be open wheel because there will be no room for fenders. 🙂

as long as they don’t split them as they did with the 993 Carrea S: 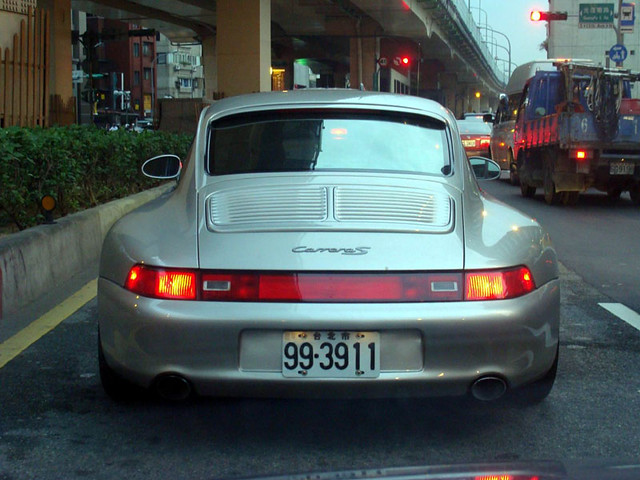 That being said, I liked the tradition of the old one…

It took a big leap for me to actually bite and get this far to comment on the aesthetic orientation of the vent. Really?

I watched that video with the sound off, and it looks absolutely ridiculous. Quickly flash some statistics, zippy zap around the desert, marvel at animated airflow patterns, and press a button to sound like you’re a real racer! :p
Voila!

I prefer my louvers to be hand-formed. How’s that?

Best Comment I’ve ever seen on here ever, bar none!

I mean, hey, nobody asked me to design it. I would hope that form follows function over at Porsche, they did their homework, and went with what works best. I’m more concerned about my motor not burning up than the orientation of the slats.

I did just notice the “active” slats on the front, which is pretty cool. If I owned one of these and found out that I needed to change some aero on it so it would live, I’d cut that bad boy up and change it. Or sell it. The whole car has been evolving, so this is just derivative of everything else. Unless it was just the stroke of someone’s pen… in which case, big whoop.

Anyhoo, cars like this are so far off my radar that I can’t believe I am commenting AGAIN on it.

Thank you Petrolicious for being just about my only internet haunt.

the new grill, at first glance, somewhat disturbing.
but this panamericana 911 variation is one of my favorite cars of all time. I was fascinated how the lines from outside the car worked their way inside the car, including the rear grill area. (never my favorite color, but after about 25 yrs….I am getting used to it)

Pretty sad situation where the point for discussion on the “new” 911 is that fact that this year’s model features lovres that are vertical not horizontal. Meanwhile everywhere else innovation and beauty are in adundance. Not over at Porschar though.

Funny, that actually was the first thing that I noticed about the new 911 when I saw the picture. I was a bit caught off guard, but I think it’s alright. Today’s 911s don’t look all that much like pre-996 911s any more. It’s fine with me, and I think today’s 911s look really fabulous in their own ways.

I knew there was something that looked off about the new design. Now I can’t unsee it! Why would they change from horizontal to vertical? It looks all wrong!

Seriously ? Hmmmn .. much as I may dislike them … seems to me them there louver thingy’s have been on and off of the 911 since the early days in one form or another … so whats the big deal about what direction they go in ?

But bring up the 911’s ever expanding waistline … the fact that a manual is no longer an option … the demise of the naturally aspirated flat six being replaced by an asthmatic turbo … the fact that the 911 is ever evolving away from being a sports GT into a luxury heavyweight cruiser for the Porsche poser crowd etc etc … ?

Now those … are genuine issues worth bringing up as well as being extremely controversial amongst the serious … rather than the Anorak , overly pedantic , nit picking poser Porschephiles

e.g . If yer gonna [ bleep ] about something . At least make it something worth [ bleeping ] about … not that it’ll make a [ bleep ] bit of difference either way in the long run …. 😉

Agreed. And, if I could afford one, I couldn’t see it from the driver’s seat.

Although I wholeheartedly agree with your opinion and it’s sad to see that manual gearboxes and N/A engines seem to be more and more a thing of the past, there is a very good reason for it, and that’s the law of the EU, that pushes european manufacturers (not 100\% sure about foreign manufacturers) to have a maximum emission of 95g/km of CO² by 2020. That, unfortunately, forces manufacturers to ditch N/A engines and utilize turbo and hybrid technologies to lower the fuel consumption and CO² emissions while still maintaining the same or gain performance.

They’re not doing this to annoy us Petrolheads or their customer base, but they HAVE TO, unfortunately. I don’t know in what way, shape or form a transmission can or will affect said CO² emmisions, but it’s undoubtably the quicker, yet less engaging, way to shift gear and to transport over the motorsport-ish feel so many customers want from their sports and high performance cars.
The only thing we can do is to accept this movement and maybe look for other alternative of the older generations, which still ticks all of the boxes we want from a performance car and go with that. 🙂

M I
Reply to  Guitar Slinger

Pascal Kluge
Reply to  M I

This generation still does, yes, but from this facelift on some models and the next generation forward the 911 will not be offered with a manual transmission anymore.

I wish they had drawn a more direct connection to the 356 by breaking the vent area into two groups. Like this… http://flatsixes.com/wp-content/uploads/2009/01/porsche356_turbo.jpg

I do believe, that they are frist thing to stand out when you look at the back because they’re black and not body coloured. When you take a look at 991 GTS which also have black, but horizontal lines you’ll see, that at first glance, they do not look drastically different. And when you look up close, i also believe that these vertical ones look better. Or maybe it’s just because it’s new :p