We try to write as often as possible about small cars here at Petrolicious because a) we like them and b) they’re fun. Sure, next to their modern counterparts, classic cars are almost always going to be smaller than the vehicles you see today—but many enthusiasts are interested in adding some of the tiniest collector cars to their fleets.

This could mean a BMW Isetta or 700, a Porsche 356, Alfa Romeo Berlina, or a Fiat Topolino 750 MM by Zagato. A Volkswagen Beetle, Messerschmitt…maybe even a classic electric car. Somewhat paradoxically, my daily driver is a new-age Fiat 500 Abarth—which is even smaller (both inside and out) than the 2-cylinder Citroën 2CV I’ve also had the pleasure of owning. I’d probably go as tiny dimensionally as a Ligier JS2 or Zagato Zele, but my dream microcar would have to be the four-wheeled Messerschmitt-based FMR Tg500.

Don’t worry, you’ll be the first to know if I find $100,000 in my sock drawer and bring one of those home. For now, the 2CV is the smallest car in terms of engine size and capability that I’ve owned. Not sure if a first gen Mazda MX5 qualifies as a classic, but it’s the smallest (and first) car I own, and the smallest car I’ve ever driven as well.

Fiat x1/9. It is a go cart for the streets. I’d drive it for a few weeks, then switch to my 124 spider, and it made the 124 feel big and spacious. The owners manual said it was built for 2 150 pound adults. For tire changes it had only 2 jack points, one on either side of the car, in the center to lift the whole side of the car.
What a fun car to drive when it was running right.

Still own one, it’s been good to me so far, and yes fun!

I had a Lancia Y10 GTie but at a time when it was just a banger, fun but very flawed and uncomfortable. Not sure they are classic really

Aside from the usual collection of Beetles there was the Fiat 850 spyder, a 600C, my MGA, but the car that was the most fun, when it ran, was the Honda 600.
At 6’5″, 240 I and my brother, he of similar size, caused many a long stare getting out of it. We may have weighed more that the car.
Sold it to an engineer so he could create his electric car.

The smallest classic I have owned was my first car, a 1959 Fiat Abarth Berlina 750

I have a ’59 Bugeye Sprite , a 2005 Lotus elise and a classic Caterham 7.
All are small cars when entering and exiting when you’re 65 years old!

We have an Isetta 300 and we are restoring (trying) a Renault 4CV. You could see the restauration process and some histories here: http://www.renault4cv.blogspot.com

Under the title “Isetta Nº” and “Restauración Nº”!

Mini 1275GT or Triumph GT6 mk2, I think the GT6 felt smaller in the cabin, I sold it because I found it a bit too uncomfortable to drive for more than an hour at a time. Started with a Renault LeCar (R5) but the best was the 06 Mini Cooper S . It was the first one in my town as I had to go to the next state to get it and always drew a crowd, I would often find 4-5 people standing around it when i came out of the store. I still miss the whine of the supercharger.

Mi first mini car was a MiniCord 1992, its a fiberglass rover mini version made in Venezuela,

I own both a ’72 Volkswagen 1200 (Beetle) and a ’70 Fiat 500F. I considered the Beetle a regular sized car, but reading this I realise there might be a trend starting. My smallest is my first car. A 1967 VW bug that was originally Java Green

My smallest was a 1958 Isetta, the earliest sports car was a 1954 MG TF but the quickest oldie was a Bug Eyed Sprite with a 202 Ci GM 6 cylinder engine. The Isetta was a hoot in London traffic, navigating Hyde Park Corner each morning on the way to work. The ’34 Ford V8 coupe I had when I was 17 set the standard. A 1961 Morris 850 (Mini – but they were too scared to name it as such) was my first car, however, it was never registered or driven on the road.

Both cars were pure fun!

1959 Autobianchi Bianchina Trasformabile Special. A whopping 21 HP on a good day but fully independent suspension, 4-speed manual, suicide doors, sliding roof and a back seat. Not many Specials around but it’s based on the original Fiat 500 so parts are mostly available. And perfect for a 1.6-car garage. 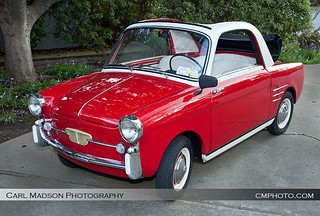 A 1967 Morris Mini with a 1.3L MG Metro engine and an 850 Austin Mini. Both RHD and both fun in their own ways. Unique in Northern Colorado to say the least.

Fiat 850. Not sure which was smallest, sedan, coupe or spider.

The smallest classic car I own is also my first ever classic car, but it certainly wont be my last. My 1978 Triumph Spitfire 1500 I usually drive the family ’73 BMW 2002… I realize it’s not exactly the smallest car, but compared to modern standards it is!

An NA Mazda MX-5. It was a pleasure to drive around town and a blast to drive on fast roads. It handled wonderfully. It went where you pointed it and if you were a bit too quick into a corner the back would come around slightly to point you the right way out. I had a non airbag Nardi steering wheel and a brushed aluminium gear knob that looked like it was out a 70’s Italian sports car. I drove it everywhere and even long distance with all my gear in it including a computer in the passengers foot-well and… Read more »

I still have my NA. Easily the best vehicle I’ve ever owned…especially in our Alberta winters (heated leather seats, limited slip diff, and perfect 50/50 weight distribution). But it still seems like big boat compared to my old Spitfire.

While not exactly small by Mini / 500 standards ;. FIAT Dino Spider .

The smallest would be the Fiat 850 Sport Spider. A lovely car that we took on our honeymoon.
After the honeymoon my wife got pregnant (as things go) so that was the end of small cars for us.

I own a Beetle and its a blast.

Would love to own a Cooper S too.

Spitfire. No need for power steering on that thing!