It’s already that time of year. BBQ grills are shut off, pool toys are packed away, and incredible discounts are offered on multi-packs of Bic pens.

Summer’s coming to an end, and with it there comes a new wave of bright-eyed new college freshmen ready to start new and exciting lives. Most of them will drive off to school in boring, aging econoboxes, unaware or simply uncaring of the better transportation options out there. But what about the gearhead college freshman? What can he or she do to get to class cheaply and reliably, but also sate those fossil-fueled passions? Fear not and give ear. We’ve complied a helpful list of affordable, fun cars for the rising Petrolisti.

Click the name of each vehicle to see matching eBay listings. Simply put, the GTI, especially the MkI, is the gold standard of what a college car should be. It’s still surprisingly inexpensive and incredibly practical for day-to-day use. If something does go wrong, parts for the GTI are cheap and plentiful. Perhaps most importantly, though, the GTI is one of the greatest low-cost driver’s cars ever made, with more fun to be had behind the wheel than any other car except perhaps the original Mini. You really can’t go wrong. There comes a point in every college student’s life when he or she needs something hauled. Dorm furniture, sports equipment, intoxicated sorority girls, whatever the case may be, at some point you’ll either need to ask a friend to move something or move it yourself. The second option requires you have either a truck or a wagon, and there’s no better wagon for a freshman than the Volvo 240 Turbo. It played a huge part in establishing Volvo’s presence as a wagon builder. It’s also associated with safety, which is incredibly important when surrounded by college students. Assumedly, then, it’s a slow, boring safety cage for a people and cargo. The 240 Turbo’s racing history would beg to differ, as the sedan won the 1985 European Touring Car Championship, beating Mitsubishi, Alfa Romeo, Mercedes, and BMW. The college lifestyle can take its toll on a car, as a full class schedule, extracurricular activities, and an active social life lead to plenty of miles being put on without much time for maintenance. Because of this, a car that can take some punishment is a must for a college student, and diesel Mercedes are borderline immortal. It’s not uncommon to find examples with hundreds of thousands of miles on the clock still in good running condition. The 300CD has more to offer than bulletproof reliability, however. The coupe is a handsome-looking machine, and at the end of the day, it’s still a Mercedes-Benz. Sporting events are an integral part of college. Almost as important as the actual game, of course, is tailgating, and to do that, the freshman will need something with, well, a tailgate—a pickup truck. Pickups are useful tools to have in college: they’re low cost, can carry tons of stuff, and are bulletproof. Just because they’re practical doesn’t mean they can’t be cool, however, and one of our favorites is the mid-80’s Toyota SR5. When done right, it can be an attractive sports truck with movie-star appeal. What movie-star appeal, you might ask? While he’s much better remembered with the DeLorean, Back to the Future fans will remember that Marty McFly’s own ride was a black lifted 1985 SR5. Going fast on a college student’s budget can be a challenge. Most cars in a college freshman’s price range are, to put it conservatively, sluggish. There are a few, however, that can be not just a joy to drive but frighteningly quick. At the top of that list is the third-generation Ford Mustang, especially the later “5.0” badged examples. 5-liter Ford V8s are strong in stock configuration, but if that’s not enough, with cheap modifications these engines can become horsepower beasts. This Mustang’s styling has also aged remarkably well, and a strong aftermarket makes them infinitely customizable. A freshman with one of these would never lose it in the campus parking lot. Sure, the Mustang is a fast car on the drag strip, but what if Campus Drive has corners? The obvious answer is to buy a sports car, but examples on a student’s budget are hard to find. One possible choice, however, is the Datsun 280Z. It may not be quite as desirable as the early Z-cars, but it’s still a classic and an absolute blast on the road. The 280Z is an easy way into the rear-drive sports car club. Yes, there’s a certain appeal to practicality, reliability, and cargo space. Lest we forget, however, college is supposed to be a fun experience, a time for exploring our boundaries and expanding our horizons. It’s said that some of the strongest relationships of a person’s life are forged in the college years. So why not start an automotive relationship with something as charismatic, exciting, and beautiful as your first significant other? Nothing else in a college student’s budget packs as much character and style as a Series 2 Alfa Romeo Spider and nothing else is going to worm its way into your heart as much as this. Also, it’s an Alfa—it’ll give the young driver plenty of opportunities to learn all about classic car maintenance along the way. This is not a game because here gamer not only playing https://scrabblewordfinder.me the game but here user can note the more word for his vocabulary. And here we can play one or more friends to each other.

I have a question, why would College Freshmen need Vintage Cars at all? Do college students visit college to show off or to earn some knowledge base?

Nice and really cool cars in the list. Thanks for sharing. Also i have explored details about it’s [url=”http://www.slideshare.net/germanautospecialist/style-urban-and-amg-line-mercedesbenz-bclass”]Safety Features of Classic car[/url] . Then it’s the responsibility of our to take a good care and to be responsible for the best outcome. The owner of the vehicle should be well aware about all the basic details of his car so only he/she will be always trouble free and get a safe journey.

You should add that the spider is only for those in graduate school.

I think all of these are represented on my campus except for the Alfa Spider. But my GTV6 is pretty close. I think an E30 is a terrific one for this list as well.

Since I commented I purchased a 1988 Saab SPG and I think it fits on campus pretty well. Any turbo 900, especially a cabriolet, would be a great college car. Safe, reliable, fun, cheap.

I am a college freshman and the E30 is a great choice. They are cheap to; buy, maintain, and drive. Not to mention they are a blast to drive.

Ha i’m in college or ‘university’ and own 2 alfas. A modern 156 and a classic 116 series GTV. Its true what they say about alfas though:
They make good drivers into great drivers, but make poor mechanics into excellent mechanics. Give it a go, you’re right college is about having a laugh.

I hate to throw a wrench in the day dreamin’, but most of those cars aren’t that realistic for college freshmen. Or at least if any of the freshmen we are talking about are as financially struck out as I was when I was that age. I know I know, I’m just being a killjoy, because I did have an Alfa Spider during my college years. I did work 2 jobs though, one to pay the rent and such, one to keep the Alfa on the road. Even then, I seem to spend more time on buses than in the… Read more »

With the exception of the Spider, all the cars above can be had for 2-5k, and most are fairly easy to wrench on with an abundance of parts available.

Well, another thing to take into account is the school itself… A parking pass on campus would cost me $1000 every semester. Not only that, but we’re in a city with a really good public transportation system that get to use for free as students.
Of the people I know who own a car, just about no one owns a classic.
That said, a Vespa or Honda Grom makes for a lot of fun and sense. I would reccommend one of those to anyone intimidated by the prospect of owning a car.

Had a 280Z in college. It was great… 10 years ago… ouch. Vintage for “new” college freshmen are things from the late 80 early 90. We are talking about 300ZX here. I do not think the Alfa is a good choice for the “new college freshman” (most will not know the movie reference). Great college cars have to be reliable (because it is the only car you own… and today’s freshman panic if the wi-fi goes down) and it has to be cheap/easy to repair (because beer money is involved and the library can only give you so many minimum… Read more »

Nice list. 🙂 I went to Shepehrd University for my misspent years of higher education. Plenty of turbo Volvos there, one or two mk1 VWs, and numerous SR5s, 300Ds (not CDs, sadly), and 5.0 Mustangs. I went through 4 vehicles during college: an ’03 VW, ’01 Pontiac Montana (*shudder*), ’87 GMC K1500 ([i]loved[/i] that thing), before finally settling on a ’69 Chevy C10 for mostly the same reasons y’all suggested the SR5 (sans 4×4). It burnt to a crisp about 2 weeks after graduation. Damn, I miss that truck sometimes. 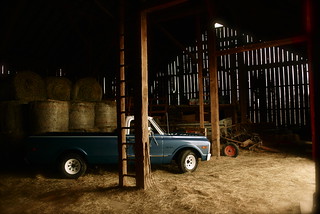 lol its the back to the future truck

I’d also add the e28 5 series to that list. I had one for half of my college years and loved it. Fun to drive, big trunk for beer, comfortable interior with room for multiple members of the opposite sex, classic shape, and most every maintenance issue could be resolved with 4 metric wrenches and a jack in the dorm parking lot (not that I’d know…).

Great mention! The e28 would make a great addition to the list.

wow, I would still love to have that Alfa Spider in my mid-20s to take my wife to the mtns and beach. Beautiful car.